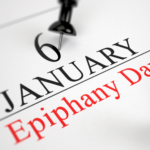 I sat down today to write this week’s blog post about the Roman ruins we found in The Netherlands last week. Then the doorbell rang, and Widgit, the dog, went crazy. He usually barks, but this time he was excited. Opening the door, I saw four local children dressed in the robes of the magi. I had forgotten today was Epiphany, or Heilige Drei Könige, the Three Holy Kings.

Here in Bavaria, the Day of the Three Holy Kings, January 6th, is a holiday. Businesses are closed. It is a day to spend with the family, eat cake, sing carols, and take down Christmas ornaments. The evening before, also known as Twelfth Night, the villagers gather at the church and place the statues of the three kings next to the manger. Afterward, in true German fashion, they gather to drink and toast to luck for family and friends in the coming year. A special beer, known as ‘Bockbier,’ is brewed for the occasion. It typically has a strong taste and a much higher alcohol content.

On the 6th, four children, three dressed as kings, and one carrying 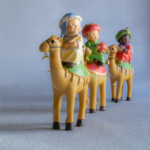 a star, go from house to house, telling the story of Jesus’ birth and the visit of the magi who followed the star and came bearing gifts. The youth collect donations for a local charity, and they ‘chalk the door’ in return. This is a blessing inscribed over the door of the house and includes the year. Typically, something like this: 20*C+M+B+23. The CMB represents the names of the three kings: Caspar, Melchior, and Balthazar. They use chalk to represent the earth, an ordinary substance.

This day is celebrated in many cultures, most commonly known as Epiphany. And in the western world, the celebrations are similar. The word epiphany means to appear. In Classical Greek, it was used for the appearance of dawn, of an enemy in battle, or the manifestation of a deity. Even today, an alternative name in Greek is ‘The Day of the Lights”. The first reference to Epiphany as a Christian feast was mentioned in 361 AD by Ammianus Marcellinus. In the Roman Empire, the day celebrated the baptism of Jesus, stemming from the belief that when Jesus was baptized, he was exactly 30. In the Latin-speaking west, it came to represent the visit of the non-Jewish peoples of the world who received the revelation. 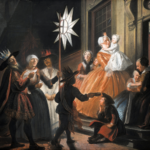 In medieval Europe, Christmastide was reckoned as the twelve days ending on January 5th, or Twelfth Night, followed by Epiphany. In the Roman Catholic Church, this was eight days long, known as the Octave. Later, it was pinpointed to January 6th, though in modern times, it often means the first Sunday falling between January 2nd-8th.

The celebrations are similar in western cultures. Each country has its own traditional cake, often with a prize hidden inside. In Germany, the Three Kings Cake has a figurine of Jesus inside. Whoever finds it gets a prize. In England, they bake Twelfth Cake, a dense fruitcake with a clove and a twig inside. Other countries fill the cake with treats for everyone. 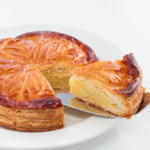 In Ireland, they celebrate Nollaig na mBan, or Women’s Christmas. On this day, it is traditional for the women who worked so hard over holiday cleaning and baking to get a day off. The men stay home with the children and do all the chores while the women relax. Nowadays, they commonly hit the pubs, go to a restaurant, or otherwise celebrate with their sisters, mothers, and friends. I think I could learn to like that. Sometimes, children give their mothers a special gift. While this holiday is dwindling in parts of Ireland, it is 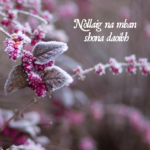 still strong in Cork and Kerry. In Scotland, they celebrate La Feill nan Righ, the feast of the Kings.

As I listened to the children recite, the thoughts of all these different celebrations around the world filled my head. When I handed over my donation, they ‘chalked my door.’ Whatever your beliefs, who wouldn’t like a blessing for joy and happiness in the new year?

4 thoughts on “Chalking My Door”