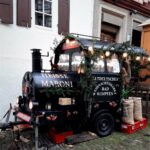 While many Americans celebrated Thanksgiving and feasted on turkey with all the trimmings, Dave and I explored the Weihnachtmarkt, or Christmas Markets, in Germany. These typically open on the first weekend of Advent and some run through Epiphany on 6 January.

The first documented Christmas Market was in Dresden Germany in 1434. This was a one-day market where people could buy meat and food items for their Christmas dinner. Others claim to be older, however, little documentation exists. As religious feast days occurred even in pre-Christian days, market celebrations were common. These continued into the Christian era and included December 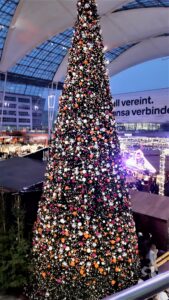 markets in Vienna 1298, Munich 1310, Bautzen 1384, and Frankfurt 1393. I suspect this lack of a firm beginning is because they already held regular town markets, and who can define which is specifically for Christmas? For example, the large market in Nurnberg dates to 1628, though possibly as early as 1530. 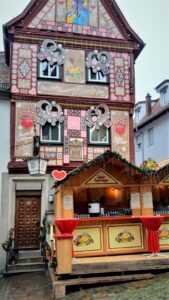 Many of these are steeped in local history with unique settings in old town squares, picturesque palaces, or castle ruins. It provides a whole experience of sensory delights with wooden huts decorated with twinkling lights and the scents of pine and holly. Browse the stalls overflowing with handicrafts, and warm yourself with a mug of gluhwein, a hot, spiced wine. Enjoy a half-meter-long bratwurst, or a slice of Stollen, a light, airy fruitcake filled with nuts and spices. Or roasted chestnuts! Listen to the traditional Christmas tunes or watch the performances of the local children singing their hearts out.

The Industrial Revolution caused vast changes in these markets where goods were available for purchase to a wider class of people with the rise of the working class. In Berlin, these markets expanded from 303 stalls in 1805 to over 600 by 1840. The elite began to look down on them for providing cheap merchandise. The burgeoning department stores feared the competition. And the church saw the rise of secular activities. The markets were moved from the main squares to land outside the town walls. 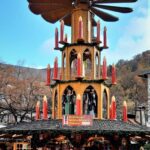 Throughout the Nazi reign of the 1930s, these fairs became devoted to national pride and Nazi symbolism replaced the Nativity scenes in Advent calendars. This lasted through most of WWII. After the war, they slowly made a comeback returning to the market squares, once again providing people with the items needed to celebrate their Christmas dinner. 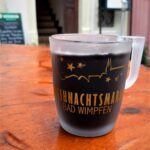 By the 1960s, consumerism prevailed, and these traditional fests became cultural events and tourist destinations. By the mid-1970s, a thousand busloads of tourists would show up on any given weekend as their popularity grew.

While these huge markets continue to thrive in Nurnberg, Munich, Berlin, and Dresden, Dave and I sought out the smaller, off-the-beaten-path celebrations. Though, we checked out the one at the Munich airport when we were there for my flight.

Over Thanksgiving weekend, we visited Bad Wimpfen, one of our favorite medieval towns, Heidelberg, and Heilbronn. The next weekend, we attended the fair in Amberg, near the house, and my favorite market at Guteneck Castle, only 30 minutes from home.

At each market, we sampled baked goods, dined on bratwurst, and topped it off with fruit dipped in chocolate. I drank gluhwein in seasonal mugs which you can keep and pay the pfand (deposit) or return to the stall. I prefer the red wine versions, some with raspberry or cherry flavoring. 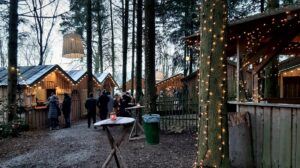 In Bad Wimpfen, the stalls are spread throughout the 13th-century town providing an amazing background of architecture. Heidelberg offers one of the longest pedestrian malls in Europe with vendors located in the corn and Rathaus markets. Munich airport has a skating rink in the middle. And Guteneck is a walk through the woods with flickering lights. It is on the grounds of the old castle, a three-sided Gothic complex first mentioned in the 12th-century. The market here features vendors in medieval clothing and pens of animals. Widgit met his new 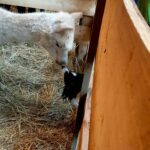 best friend, an Alpaca, there. Alas, it was not for sale, nor would Dave let me bring him home.

1 thought on “It’s time for Gluhwein!”