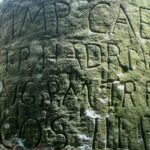 I should know better. I’ve seen Roman sites in Italy, Great Britain, Germany, and even on the island of Crete. So why was I surprised to find them in The Netherlands? Granted, it was the frontier, but Romans were there when Julius Caesar conquered the tribes between 57-53 BC. The subsequent 450 years of Roman rule profoundly changed the people of The Netherlands.

In 47 AD, the emperor, Claudius, decreed the empire’s border extended to the Rhine Delta and along the Elbe. This boundary defined the Limes of the Roman Frontier. The Latin word limes (pronounced lee-mes) is the origin of the modern word limits. Finding a fordable place on the Rhine River, they built Castellum Traiectum, the city of Utrecht today. 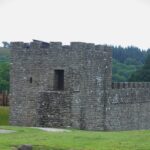 Before this, the area was inhabited by tribes the Romans referred to as Gauls and the Greeks called Keltoi (Celts). These tribes did not accept this delineation without a fight, and when the Batavi revolted against Julius Civils in AD 69-70, they burned the Roman fort, Traiectum. One soldier, probably an officer, buried his cache of fifty gold coins which archaeologists later discovered buried below the level of the burnt structure. 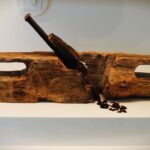 Based on the stamps found, the fort appears to have been inhabited by cohors II Hispanorum peditata, an auxiliary infantry. Evidence shows the fort was rebuilt four times, each time was raised by adding fill. The original, and three subsequent ones, were built of wood on the same 360’x430′ footprint. The final version was constructed of stone and was slightly larger at 410×492 feet. It consisted of a headquarters, or Principia, of 89×89 feet, containing an atrium, a cross hall, and five rooms. The central room and the atrium contained stone altars of Roman gods. The entire fort was surrounded by a protective ditch and had two adjacent vici to the east and west. A vicus is a community where craftsmen lived and worked, supporting the fort. 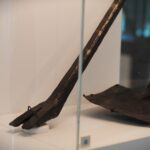 The area to the north remained occupied by the Frisii and the Chauci tribes. While they remained outside Roman rule, they were not outside its presence and influence. Over time, the Frisii provided Roman auxiliaries through treaties. However, the tribe often joined forces and fought with other Germanic tribes against Rome.

In 1929, archaeologists located the Principia and a section of the fort’s walls below the main cathedral in Utrecht at a depth of 3.8 meters. They were searching for an earlier medieval church when their priorities changed after discovering the Roman headquarters. This Principia is fully excavated, but unfortunately, tours were not open the day we were there. 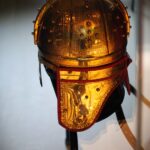 Utrecht is unusual in that there were three forts in the immediate area. The main fort, Traiectum, lies under the modern city’s center, beneath the cathedral. Fort Fectio, with its reconstructed watch tower, was exceptionally large for a frontier post. Numerous finds, mostly of military nature, have been discovered, such as swords and helmets. Castellum Hoge Woerd, or High Mound, has a modern re-creation sitting exactly where the fort used to guard the Limes. While a modern interpretation, the dimensions are the same and give one an idea of the size and construction of a typical fort.

Castellum Hoge Woerd was open while we were there over the holidays, and to our delight, De Meern 1, a 2,000-year-old Roman barge, sits in the lobby. Another six Roman ships were found on the site, but Meern 1 was the first and the most complete. She is 25 meters in length, and dendrochronology dates the wood to a tree from autumn 156 AD. Wow! 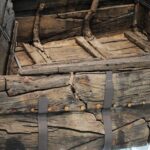 It is remarkable how much remains intact after lying in the mud all that time. The cabin in the rear and the chests and tools found onboard give us a sneak peek into the captain’s life in the second century. And the tools? They look like those we use today.

The Frontiers of the Roman Empire was added to UNESCO’s list in 1987, stretching 550 km in Germany and 118 km along Hadrian’s Wall in Great Britain. In 2021, 600 km along the Danube and 400 km along the Rhine were added to that list. The Limes comprise three trans-national sites covering five countries: Austria, Germany, The Netherlands, Slovakia, and the United Kingdom. 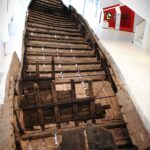 The Lower Limes covering the stretch from the Rhine Massif in Germany hitting the North Sea in The Netherlands include 102 different sites, three of which we discovered in Utrecht. I love to travel. We always seem to find interesting things to see! Do you allow time to explore and discover?