When you look back at the past, do you think of a simpler life? Or do you consider it a more difficult time? That is a tricky question as it depends more on your circumstances than the basic elements of daily life. But I think it’s a bit of both. Sometimes, I think it would be nice to give up the daily hustle and bustle of the modern world and return to a simpler time. I say that as I type this on my computer by the light of an electric lamp. But, these were some of the thoughts running through my mind as we toured the Gutach living museum in the Black Forest in Germany. 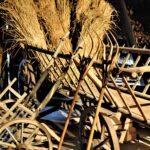 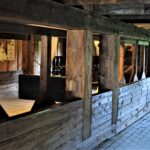 By today’s standards, I think living over my animals might be a smelly ordeal. But if that is what I was used to, it might not be so bad. Your animals were your livelihood then, and taking proper care of them was paramount. During the winters, they needed to be warm and fed. Most houses contained chutes, so the grain stored in the loft above could be dropped down to provide for the animals during those cold and snowy winters. Grasses beneath the floorboards collected the waste and were used as fertilizer for spring planting.

It surprised me how open and bright the upper floor was, with the sunshine streaming in through the windows. The main room was devoted to the table where the family ate and took care of business. Much work was done there with the light flooding the room during the day. There was no living room as we 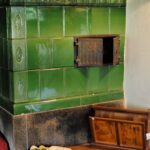 know it today. The closest thing to that was the bench lining the wall surrounding the tile heating system.

That heating system was pretty ingenious. The fire in the kitchen stove burned all day and was connected through the wall to the tile-covered heater, which warmed the main room. In some homes, this was the only level between the animals below and the loft storage above. However, others contained an additional sleeping floor. 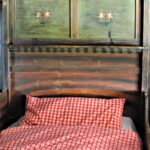 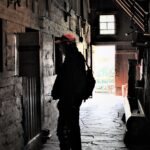 As I mentioned in the previous post, the loft was accessed by a ramp from the hillside behind the house to store grain and farm equipment. The massive overhanging roof created an area beneath it for additional covered places for daily tasks.

This was often the location of the family’s business. Weaving shops, woodworkers, etc., used these spaces, which were protected from the elements and were cooler in the summer. 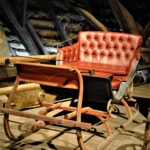 As I wandered through, I compared things to life today, at times yearning for its simplicity. I could travel by horse-drawn sled; after all, I wouldn’t be going very far. Everything you need is nearby. Your neighbors were the woodworker, the baker, the brewer, the miller (grain, hemp/flax), and the woodsman with his sawmill. Freshly baked bread from the baker that I obtained by trade would be delicious. The list goes on. 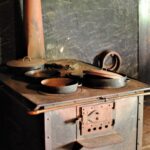 And I could cook over a stove such as the ones I saw. Or Dave could. He drooled over some of them and their cast-iron pots. Quite a few of the implements haven’t changed over the centuries. 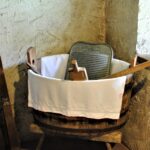 Romantic notions aside, one thing I would not enjoy, especially in winter, was laundry. I’m not too fond of that job today, even with the modern conveniences, but doing it in a large tub is right out! And I would definitely want a mangle. That being said, when we lived in Italy and Crete, with the fine weather there, I often hung our laundry out to dry.

How about you? Would you have survived back then?

2 thoughts on “Those were the days! Or were they?”