Every so often, the poem, The Englishman’s Nightmare, by Tom Anderson Cairns makes the rounds. It is usually printed on tea towels and coffee mugs and tells the tale of an Englishman coming home after a hard day’s work. Everywhere he turns, he admires his modern conveniences, and while he is so proud of them, many were invented by the Scots.

The same can be said for the Native Americans. Many items in common usage today can be traced to them. As I continue celebrating Native American Heritage Month, I thought I would explore some of these. In my opinion, their ingenuity and achievements are often overlooked.

One of my favorite pastimes is kayaking. I love being on the water, but paddling along in my kayak is a special time. The Canadian Inuit tribes are credited with building a narrow waterproof boat with an enclosed top. In use over 2,000 years ago, these were fashioned using wood or whalebone frames, with seal or caribou skin stretched over them. Created entirely of natural materials, they varied in design from 4 to 7 meters in length and could carry 1-3 people. The most common variety was a one-person enclosed hunting craft with a single or double-bladed paddle. In foul weather, a parka worn by the occupant could be tied around the rim, making the kayak watertight. While today’s models are made of high-tech manufactured materials, this basic design has not changed over the centuries. 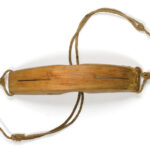 Another favorite pastime of mine is snow skiing, and who would do this in the glaring sun without eye protection? The Inuit people developed a type of goggles to protect their eyes from the harsh ultraviolet rays of the sun glaring off the snow. They carved shapes from driftwood, bone, ivory, or antlers that fit the individual’s face. Then they opened a slit in the material, which simulated squinting and allowed less of the sun’s rays to reach the eye. Later versions were formed from animal hide.

Upon his return, Christopher Columbus reported on two items he found: rubber balls and rubber boots. Using established trade routes, these were later manufactured on a large scale. However, it was the Native Americans who cut into the bark of the rubber tree and collected the sap. This goo was formed and held over the fire, adding more of the substance to form a ball. It was a long, hot process, but the balls were popular for fun and games. However, some took it further, coating their feet in the sticky goo and holding them over the fire. I imagine that was a rather uncomfortable process. A variation on this was to cover moccasins in the sticky sap creating rubber boots. 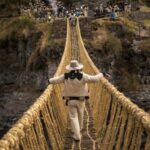 In South America, the Incas developed a system of braiding grasses into thick ropes. These cables sometimes reached more than two feet in diameter and were exceedingly strong. They used these for suspension bridges across the gorges. The Q’eswachaka bridge in the Peruvian Andes still exists five centuries later. Local communities meet to replace the woven ropes every so often, cutting the existing bridge and allowing it to fall into the canyon below. Today’s suspension bridges use similar designs with modern materials, such as steel.

Many of our modern medicines date back to Native Americans. From toothaches to treating wounds or illnesses, the natives relied on plant-based remedies. But that is the topic of a future post, so I won’t spend time on it now.

Suffice it to say very few of our ‘modern’ inventions are actually new. Most date back to the ingenuity of our ancestors.