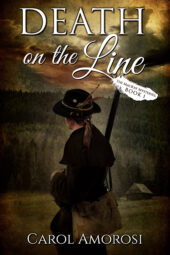 I don’t usually write about my books here. I prefer to share random articles about the past or the culture of the places we travel. There are so many fascinating tidbits out there. But this week marks one year since Angus MacKay sailed to the colonies to try to make something of himself and instead found sabotage and murder. Actually, Death on the Line sailed into the mighty port of Amazon.com, but I couldn’t let this week pass without acknowledging it.

When I think back on the day I sent that rough first draft to a few unsuspecting souls, I am almost embarrassed. But their honesty helped me improve and learn. Since then, I have taken courses, attended summits, and made friends in the industry across the globe. Along the way, beta readers, editors, cover designers, and formatters have helped me. Friends and family have supported me, and I am eternally grateful to each of the above.

When my son, Ian, challenged me to join him in a project to write 500 words a day for five days a week, I had no clue what I would write. But during lockdown here in Germany, it gave me something positive to focus on each day. After a few months, I had a 60,000-word manuscript and absolutely no idea what to do with that VERY rough draft.

I’ve always enjoyed classic mystery writers, such as Agatha Christie. They are too many to name. I grew up on Nancy Drew and later waited each week for the next episode of Mystery on PBS or Midsommer Murders on BBC America. From Cadfael to Hamish Macbeth, I loved these cozy-style mysteries; they have each influenced me in one way or another. With the weight of covid hanging over us, I felt drawn to writing something lighter, with a bit of history and a puzzle to solve.

History has always fascinated me. And living near the historic triangle of Jamestown-Yorktown-Williamsburg allowed me to explore in my backyard. When I thought about writing, I always assumed that would be the setting for my stories. But a chance comment at a music fest, followed by the opportunity to see George Washington’s survey equipment changed that idea. I was listening to friends of mine cover Mark Knopfler’s Sailing to Philadelphia one summer when a woman in the stands hollered out, “oh, Mason and Dixon, those are the guys who decided which side people were on in the Civil War.” I was stunned. They measured that border 100 years earlier. And having studied those men now, I believe they would have rolled over in their graves. I hoped that through a fictional tale, people might pick up a bit of history. 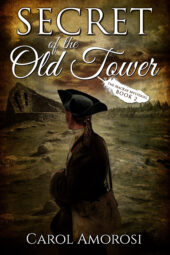 I set out to write a stand-alone book. Little did I know then that a year after its publication, I would be completing a trilogy. Sign of Nine Stripes, the continuation of Angus’ story, is set during the turbulent times leading into the American Revolution. It will be released in January 2023.

Statistics show that 80% of indie authors don’t sell 100 copies over the life of their book. Death on the Line has more than tripled that number in the first year. Secret of the Old Tower has also surpassed that figure in the first six months. So I am ecstatic and enjoying the journey.

November is Native American Heritage Month. So, this month, my posts will highlight their challenges and accomplishments in the face of European colonization. My research has taught me much about their lives, joys, and struggles.

Until then, Happy Birthday, Angus!