The other day, my landlady showed up with a bucket of currants. Don’t get me wrong; I love currants. But what was I to do with a bucket load? I froze most of them in small batches in freezer bags by first spreading them out on a tray in the freezer for twenty minutes.

But I wanted to do something with a few of them now. And I remembered a recipe for scones we tried when I was an interpreter with the 7th Virginia Regiment. We baked those in a cast-iron pot over a fire. I will admit to cheating a bit this time and baking them in the oven. Our large cast-iron pots are in storage in the U.S. now, and we only have the smaller pieces with us. After all, it is only the two of us. And I don’t have a fire pit. So, we make do with what we have.

Another cheat (and one I also used with the 7th Virginia interpretation) was the use of baking powder. Baking powder was developed in England by Alfred Bird in 1843. The double-action formula didn’t hit the markets until 1860. Until that time, bread and cakes required yeast to rise. So, many cakes did not use yeast, as it takes time to develop and dies if proper care is not taken. These cakes tended to be very dense and heavy. 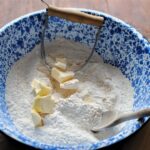 In 1792, Amelia Simmons published American Cookery, the first American cookbook. She describes three leavening methods: baker’s yeast, emptins (the leftovers from brewer’s yeast), and pearlash. The process of how yeast worked was not fully understood at the time. Bakers obtained yeast from brewers and distillers. Others, who made their own ale, could use the dregs or ’emptins’ in their baking. A few enterprising bakers tried exposing flour and water to the air in the hopes they could catch some wild yeast and keep it alive. Good luck! However, the third option, pearlash, is purified potash. It is an alkaline salt that reacts with water or acids, such as sour milk or juice. It was used by Native Americans and passed on to the colonists. As a side note, the first American patent went to Samuel Hopkins on 31 July 1790 to use pearlash as a fertilizer.

For such a simple fare, the humble scone causes much debate. Where did they originate? How do you pronounce the name? Even how to eat them creates controversy! 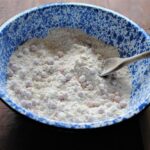 Scones are thought to originate in Scotland in the 16th century. A Scottish poem written in 1513 is the first printed reference. But as things tended to be around well before they were written about, this is up for debate. The Dutch have their schoonbrood or spoon bread, and the Germans have their schone, meaning fine bread.

When you think of the scone today, England and tea come to mind no matter where they originated. They became essential to the tea ritual when Anna, Duchess of Bedford (1788-1861), asked for a light snack with her tea. Her servant provided scones, and she was so delighted that she made it a daily ritual. The Duchess was a close friend of Queen Victoria, who soon took up the habit.

I’m from the U.S., so for me, the pronunciation would rhyme with tone. However, I have many British friends who prefer to rhyme with gone. Either way, this sums it up rather well:

I asked the maid in a dulcet tone

To order me a buttered scone;

The silly girl has been and gone

And ordered me a buttered scone.

And finally, how does one eat it? Jam first or cream first seems to be a hotly debated question. The center of this debate is between Devon and Cornwall. 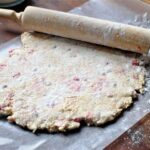 Cream tea is popular in both, but they are very particular about how it is served. In Cornwall, the jam is spread first, so it sinks into the warm scone, and clotted cream is added to the top. In Devon, however, they prefer the cream spread first to form a barrier between the jam and the scone. Either way, they sound great to me!

So, this humble pastry has created quite a stir. Which reminds me, I should be stirring my batter. The recipe I used is modified from the original and is as follows:

Turn onto a lightly floured surface and roll to ¾” in thickness. Cut with a 2″ biscuit cutter (a juice glass works just as well). Bake until golden brown, approximately10-15 minutes.

Serve warm. I’ll leave the toppings up to you! 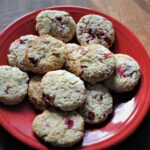 Enjoy! They were delicious!