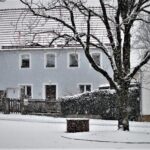 Dave and I love old houses; the older, the better. Our house in Germany was built in 1705. It began life as a single-story, and they added an upper floor in 1841. Over the centuries, it has been updated, but the original footprint and meter-thick walls are unchanged. It does have its quirks, which are part of its charm. However, the doors to the bedrooms upstairs are 5′-4″, meaning I just fit. Unfortunately, Dave has hit his head a few times, so maybe, he doesn’t love everything.

Speaking of quirky old houses, we recently spent a long weekend in the Black Forest town of Schiltach. 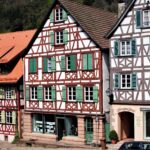 We wanted to stay within the original city walls and booked an apartment in a building dating back to 1568. The house still stands though there had been several fires in the town. Records from 1691 show a stocking weaver lived in the home and worked in his shop on the ground floor. The bedroom floor tilts a good 4 inches now and needs a bit of a shim. 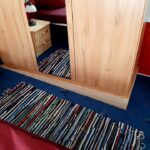 Schiltach dates back to the 11th century as a parish for the surrounding farms that go back even further. Its ‘town of half-timbered houses and rafters’ was mentioned in written records in 1275. It is a scene straight out of picture books and a journey into the past. Today it is a protected historical site of the medieval period. Schiltach lies on an old Roman road (what old town here doesn’t?) running from Strasbourg, France, to what is now the town of Rottweil in Germany. 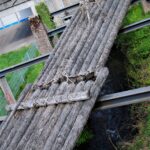 For centuries Schiltach thrived on its position on the trade route through the forest and provided trading posts and lodging for travelers. Surrounded by wooded hillsides, the location at the confluence of the Schiltach and Kinzig rivers is ideal for transporting goods. But its most significant trade came from the sawmills and the rafting business.

When you hear rafting, don’t think whitewater excitement; think 600 meters of logs lashed together riding down the narrow river to the Rhine. In the forest, spruce, fir, and hazel trees were felled and transported down the steep hillside on slides constructed of logs. Once they reached the valley floor, they were cut to lengths and lashed with weeds to form a raft. Several of these would be connected, forming a train 200-600 meters in length. At the head rode the ‘forewood’ with his oar. 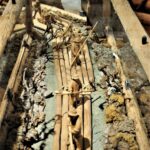 The Dutchman was the pride of any forester. Receiving this title in the 17th century, the logs known as the kings of the forest were transported to Holland. These timbers had a minimum length of 18.6 meters with a diameter at 18 meters of at least 48 centimeters. For the foundation of the royal palace in Amsterdam, 13,600 such logs were required. Most of the rest went into shipbuilding and foundations for the city’s urban development. The last of the Kinzig rafts floated downriver in 1896. However, in 1998, the Schiltach Rafters Association was born. In the fall of 2000, eighteen members rode the logs down the river in the same manner as their ancestors.

The village, built on a hillside overlooking the river, claims to have the steepest market square in Germany. There is a lantern procession through the court and down to the church in period clothing every New Year’s Eve. The street lights are turned off, and pitch torches are lit. We think it might be fun to return for that. 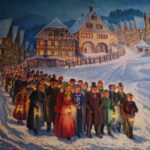 In the meantime, we’ll enjoy our ‘old’ house and life here in the village.