Since the first declaration in 1991, U.S. presidents have designated March as Irish-American month. The proclamation calls on Americans to “celebrate the achievements and contributions of Irish Americans to our Nation with appropriate ceremonies, activities, and programs.” With St. Patrick’s Day on March 17th, the choice of the month comes as no surprise. So, I decided to dedicate the posts this month to the Irish and their contributions to our country. Some of my ancestors were Irish, so I pay tribute to their courage and determination, as well.

It seems appropriate to start this series with their emigration. Why did the Irish pack up and leave their homes to make that leap of faith, hoping they would find a better life in America?

Some claim the first immigrant was Saint Brendan, who sailed to the New World a thousand years before Christopher Columbus. We’ll probably never 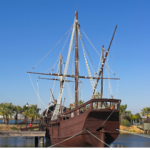 know, but the first documented immigrant was William Ayers. Born in Galway, he was a crewman aboard one of Columbus’s ships in 1492.

While a few could pay their own way and arrived seeking adventure, most were poor and came over as indentured servants. They sold the next seven years or so of their lives in servitude for the price of their fare. These numbers grew during the eighteenth century, but the numbers initially were fairly small. Two significant forces drove these early arrivals: religious persecution and the lack of opportunity in their homeland.

During the eighteenth century, Ireland’s population almost tripled in just over a hundred years and became the most densely populated country in Europe. With limited land available to an island nation, many were forced off their land with no other choice but to emigrate. Often these people were unskilled farmers. Later, industrial advances at the dawn of the nineteenth century forced smaller businesses, such as spinning and weaving, out of business. Many families were left destitute, and starvation was never far away.

During this period, the vast majority of Irish were Catholics who were persecuted in their homeland. However, there were also Presbyterians from Ulster who came in search of religious freedom. These people were initially sent to Ireland by the British Crown and were often referred to as Scots-Irish, though they considered themselves distinctly Irish.

Most of these early immigrants preferred to settle in the mid-Atlantic region, where they sought freedom from the harsh laws placed upon them by the British Crown, which sought to wipe out their religion and their Celtic heritage.

As immigration increased in the nineteenth century, more and more skilled laborers arrived looking for employment. They tended to settle in the larger urban areas such as New York, Boston, and Philadelphia. While poor, they were not as destitute as the earlier arrivals. That is until the potato famine in the mid-1800s.

Following several failed crop harvests due to blight, families were left to starve. As the potato was a major food crop, this was

the harshest disaster in their history. It is estimated that over 1.5 million Irish came to America during that brief time. Few had the money to become farmers in this new land and had to learn new skills.

By the turn of the twentieth century, statistics show that more single Irish women were arriving than men. The Irish came looking for a better life and freedom, always seeking opportunity. In subsequent posts this month, I will explore the culture and heritage they brought with them and the contributions these people made to the developing United States.